February 5th, 2011 was supposed to be a special day for the Penn Museum as it opened the final leg of a 3-city tour of Xinjiang’s “Secret of the Silk Road” exhibit. Camels circled the building and dancers took to the stage. The only thing missing at the museum that day were all the Silk Road artifacts – including the mummies.

The planning of the “Secrets of the Silk Road” tour, which has already stoped at the Bowers Museum in California and the Houston Museum of Natural Science, was a project that for some was over 10 years in the planning. Although both of these museum exhibits ran for their duration without problems, something has happened that caused Chinese officials to cancel any further displays.

Why China Canceled the Xinjiang Exhibit 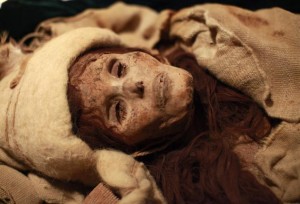 Naturally the first question that has popped into everybody’s mind is “Why stop the exhibit?” News reporters and bloggers have risen to the challenge of explaining this odd Chinese behavior and the reasons are as numerous as the people who think them up. Here are my favorites:

If I had to place a bet, I wouldn’t waste my money on any of these theories. The fact is that the mummies are still on US soil and hopes are still high that a negotiation can be reached to still display the mummies at the Penn Museum.

Why would China cause such problems here? Just because they can. President Hu has left the country after being pressured to say that China has a lot to learn in the area of human rights and the politics surrounding this exhibit are sensitive already. Any “i” left undotted had the potential to halt this Silk Road tour and I doubt anybody is going to fess up to the mistake.

What Does This Mean?

In this debacle, nobody is winning.  So far, this is what is happening:

If you happen to be near the Penn Museum, I hope you’ll show your support and still stop by for a visit. Like I said, it’s possible that the exhibit will still happen, so keep an eye on the Penn Museium website.

As for the questions surrounding the mystery of this sudden Chinese change of heart…don’t hold your breath for an answer any time soon.