The Turpan Hotel is located down a quiet alley tucked away in the southern portion of the city. It’s a bit of a walking distance from many of the tourist attractions around town, including the Uyghur bazaar and the Turpan Museum, but overall it offers a nice atmosphere.

Although it’s far from many local restaurants, one thing the Turpan Hotel does have is John’s Cafe, a place dedicated to travelers that opens between June and October. Here they sell both local food and western options, although the quality leaves much to be desired.

Despite the passage of time, the Turpan Hotel remains just as it has been for years – old and run down. That’s not to say it’s a bad place to stay, but don’t expect any amount of luxury here.

There used to be a swimming pool on the hotel grounds, but that has been left in disrepair.

The hotel lobby is nicely decorated and the street outside the hotel grounds is beautiful to walk in the summer evenings. Overall I would say that the Turpan hotel offers a peaceful atmosphere at a good price despite its need for renovation. 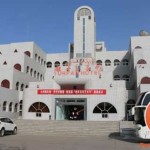 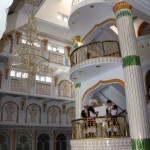 The great thing about the Turpan Hotel is that it offers not only standard rooms and suites, but also some dorms out back near John’s Cafe. In total there are 187 standard rooms, 5 suites, 12 triple rooms and 15 dormitories to choose from.