Although today was a public holiday for most everybody in Xinjiang, if you were celebrating the Corban Festival (also known as Eid al-Adha) it was anything but relaxing.  Whether you’re a Muslim visiting a mosque in the early morning, killing a sheep in the late morning, and visiting family and friends in the afternoon or a bystander observing all these traditions, you’re probably tired.  I am, that’s for sure.

I’m ashamed to admit that although my wife and I have lived here in Xinjiang for two and a half years, this is actually the first Corban festival we have experienced.  We had seen the dead sheep hanging in the courtyard surrounded by many Muslim men outside our window and hoped there was a good reason for it, but never made the effort to inquire what that reason was.  This year we asked some of our Uyghur friends to introduce us to this part of their Muslim heritage and they happily obliged.

The History of Corban

At first, I had a difficult time understanding the reason for this holiday.  At its core, it is a Muslim holiday, which means that here in Xinjiang it is not only the Uyghurs who celebrate, but also some Chinese Muslims that are called “Hui” (pronounced “hway”).  My Chinese friends keep trying to tell me that this is the “Muslim New Year”, but I have found nothing to support that claim.  Rather, I think this is just a religious holiday celebrated by all Muslims all over the world.

In short, the story of Corban involves the sacrificial lamb that was given to Abraham in place of his son whom he was supposed to kill.  This story may sound very familiar to many of  you who, including myself, who grew up with similar stories, but there is a little twist.  In this version of the story, the son who was to be sacrificed was named Ishmael, not Isaac.

Ironically, the Chinese name for this holiday, “Corban” or 古尔邦节 (gǔěrbāng jié), is a Hebrew word meaning “sacrifice”.  Think you can find this word in any Muslim texts?  Not quite.  Try the untranslated version of Mark 7:11.

You always know the Corban Festival is coming by the amount of sheep poop you find on the streets and sidewalks.  It’s EVERYWHERE.  Sheep are trucked in from hundreds of kilometers away to accommodate for their high demand during this holiday.  Most of them can be bought at the market near the local mosque, which is exactly where my morning began.

The morning prayers – which we decided to skip because we had already seen the prayers in Kashgar (watch the video) – were held at sun up and attended by all the male Muslims who were able to come.  One these were finished the square in front of the mosque became filled with merchants selling their sheep.  I watched as hundreds of sheep stood waiting for their number to be called, huddled together while their friend got weighed and their owner shouted out prices.  This year the average price for a sheep ranged from 650 RMB (almost US$100) for a small ‘weight-watchers’ lamb to almost 900 RMB (US$130) for a sheep who hadn’t yet lost his Thanksgiving pounds.

All throughout our somewhat modern city sheep were being led, dragged, and carried from the market to their respective graves, nervously adding more poop to the already dirty roads. 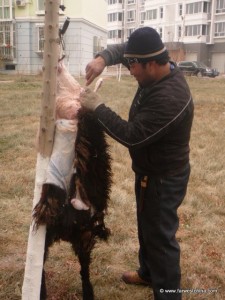 When I asked my Uyghur friend if he knew how to kill a lamb, he laughed at me and told me “No!  But I guess I ought to learn that someday, shouldn’t I?”  I certainly don’t know how to kill a sheep and the majority of Uyghur and Muslim men probably don’t know how to either, which is why there are special butchers who make their rounds helping each family prepare for their lamb feast.  The lamb is usually taken to the small courtyard right outside the apartment buildings to be sacrificed in full view of all people, Muslim or non-Muslim, who have a window.

This year our friendly butcher was very good…and incredibly fast!  In less than 20 minutes he turned our young sheep into usable meat (so fresh it was still steaming) and was off to the next house with payment in hand.  He didn’t accept cash though and I highly doubt he wanted checks, either.  Instead, his payment was the skin and intestines from each sheep he prepared, which on this morning might be around ten.  These skins could then be sold for an average of 50 yuan (US$7) and were put into piles about 1.5 meters high along the main street of our city. 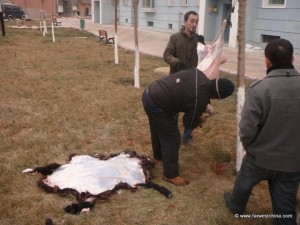 While some of this lamb may be frozen for later use, a lot of it is cooked on the spot for the Corban festivities.  For the Uyghurs here in Xinjiang this festival is a huge celebration that involves visiting relatives and friends whom you may not have seen much throughout the year.  From noon until the evening the men of the families make thier way from house to house for quick reunions that may last from only 15 minutes to an hour.

For kids this festival can be similar to Christmas.  Children are required to dress up when they visit family and are often given gifts to open.  Our friend’s son received a remote-control car which he played with outside next to the man who was killing his lunch.  Apparently he wasn’t as mesmerized by the scene as we were.

So now we’re back at our home hoping not to eat lamb for a few days.  Watching an animal as it becomes food is not always settling to the stomach.  It’s been an interesting and memorable day, though, and because this festival is celebrated on the lunar calendar we only have to wait another 353 days before we get to do this all over again.  As always, this is just one experience from one city here in Xinjiang, so if I’m missing something, please let me know!