Facts and Figures: Lop Nor and the Nuclear Race 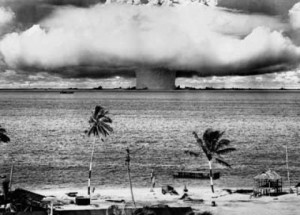 It wasn’t until late last year that I became interested in the Lop Nor region of the Xinjiang province, probably about the time when I wrote the article about our proud new addition to the area: the world’s largest fertilizer plant.  Since that time I’ve slowly been researching the history and development of the region – mostly out of personal curiosity – and making notes from what I see on Google Earth.  I wasn’t planning on writing about it any time soon except yesterday I ran across a Times Online article which was absolutely fascinating.  I wanted to share a few of the facts from this article as well as some other numbers I’ve run across myself just as a reminder to everybody, including myself, the horrible costs of living in a nuclear world.

It’s a shame that all of this has to happen, not to mention the trillions, not billions, of dollars that have been spent in development, transport and waste disposal.  Soon China is going to have to own up and pass something similar to the RECA, some form of compensation for the workers and people who lived near the test sites, especially because most of those affected happen to be minorities.

Read the article below.  It’s crazy.  What are your thoughts?